Ralph Meaney, the legendary Porsche racer, bought the car new in the fall of 1973. Meaney modified the Carrera into a race car and competed it up and down the East Coast in SCCA and IMSA events. Ralph and several pals repaired the Carrera to the form depicted in the photos after it had been sitting for years. The mechanicals, as well as some minor features, on the Carrera to be finalized. This fantastic old 911 would be a fantastic car to restore and race in vintage events. POA. Original title and MSO. 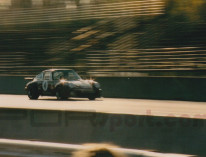